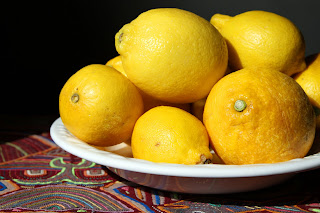 It’s winter and the markets are citrus full. I’ve been wanting to preserve lemons for a while now and I finally did.

I took the best looking lemons of the bunch I bought at the market on Saturday. Washed them and rubbed off any blemishes. Then I cut off the ends or stems and cut down about 3/4 of the way in a cross to quarter them but leave the base intact.

I put about a tablespoon of Kosher salt in the bottom of a jar and then poured salt inside the quartered lemons. Then I shoved, and I mean shoved, the lemons in the jar so that the salt would mix with the lemon juice. Once the jar was full, I squeezed a few lemons to fill the jar with juice and sprinkled some more Kosher salt on the top. 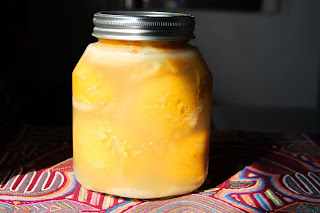 Supposedly in three weeks I’ll have preserved lemons and we can try some Moroccan dishes. Fingers crossed.
Posted by Inspirosity at 4:38 PM 6 comments:

Obama Makes My Face Light Up

When my Argentinean friends ask me how McCain could have chosen Palin as his running mate, I usually have to get into the discussion of America's culture war. It's a topic that always gets me worked up, so I try to summarize for them:

Half of the country is proud of our diversity and half is threatened by it. Half believes that people who don't have a job need a hand to get back on track, and half thinks they're slackers. Half believes in science, and half mocks science.

Then I explain that Obama represents the first half, McCain is somewhere in the middle, and Palin represents the second half. Poor Biden, no one seems to ask about him.

But whenever I talk about Obama, my friends notice that my face lights up. Since Argentines are inherently skeptical of government, they think I'm naive (and they may be right). Explaining my excitement over Obama is way more difficult than explaining the culture wars.

"It's what Obama represents," I tell them. "He's half black, half white, well educated, articulate, rational. He makes me feel good about my country again."

They inevitably bring up Clinton. "Besides the race issue," they ask, "isn't Obama pretty much like Clinton?"

And politically, they're right. He is a lot like Clinton. And while I liked Clinton, my face didn't light up when I spoke about him. "It could just be that the past eight years were so bad that any sign of hope makes one half of the country feel elated," a friend suggested.

"Maybe." I left it at that not sure how I could explain what it is really about to me.

But today I read Roger Cohen's op-ed in the New York Times, American Stories. And now, I'm ready to go out with my friends tonight and give them my answer to the question.

There are many of cultural divides in the US, but the big ones have been over race, religion, and region. White vs. black, Christians vs. secularists, Northerners vs. Southerners. And over the past eight years, us vs. them has reached catastrophic levels and it has been fueled by our leaders. To me, Obama represents the opportunity for Americans to be one people. His speeches inspire us to see past these divides. It's in part due to the fact that he doesn't attack his opponents on cultural issues, he rises above that, and, in so doing, sets an example for everyone. That's the hope that I see in Obama.

And I hope that if this is the change Obama brings to the States, it might spread. And that, I believe, would bring more security and prosperity to the entire world.
Posted by Inspirosity at 12:37 AM 169 comments:

That's what they are calling Liddy Dole's ad which accuses her opponent of, in essence, being an atheist. The final line pretends to be Kay Hagan's voice saying, "There is no god." Hagan strikes back, "I've taught Sunday school."

A part of me wonders why this is considered to be the "worst" ad ever. I mean, oooooo... they called you an atheist. Get out the guns. Prove you aren't. After all, anyone who's taught Sunday school must be pro-America.

So, as Michelle Bachman made clear, elitists (i.e. those who read and speak in complete sentences) are anti-American. And now, Liddy Dole (and Kay Hagan with her response to Dole) make the case for atheist=bad person. Ah yes, you're an atheist, must mean you're a terrorist. You're the devil. Bet you hang out with that Ayres guy.

I get it. Anyone who wants to run for office in the States must end every speech with "God Bless America." I get it. Americans love their god more than their constitution. But since these people are not elitists, they probably have not read the constitution or history. To them it reads, we guarantee the "right to religion," and down low at the bottom in 6 pt. font below the signatures it says, "but if you don't believe in God, you're outta here."

The media should not be calling this the worst ad in this political cycle. The ad linked Hagan to a group of secularists that want religion to be a private matter. They want government officials who wonder "is this it? Don't we need to make life here on Earth the best it can be because there may not be a heaven?" They want "In God We Trust" taken off dollars because we should trust in ourselves. And hey, let's face it... if there is a god, don't you think that would be the big plan anyway?

I put you here, gave you these resources, this amazing planet, a whole bunch of other people to share it with....it's your turn to do something?

Ah... I must be a socialist, communist, atheist, anti-American, elitist. How could I even think such a thing?
Posted by Inspirosity at 1:33 AM No comments:

I'm sort of bummed to not be in Buenos Aires for tonight's debate between Biden and Palin. Last week the turnout in BA was amazing, so this one ought to really impress.

If I were there, I'd print out these Bingo cards and bring enough for at least the 300 people who showed up for last week's debate.
Posted by Inspirosity at 4:18 PM No comments:

I've been in Los Angeles for a while now and got to see the Republican National Convention coverage and the aftermath of the Sarah Palin pick. And this is exactly why I don't watch TV. Talk about make you stupid. When I'm in Argentina, it's easy to not really know what issues are being talked about here in the States or if they are talking about issues at all.

One non-issue the RNC slammed down our throats at the convention was the small town values vs. the elitist cosmopolitan values of those who actually read books and have opinions (informed opinions) on the issues. Here's the Daily Show's take on small town values. You gotta love Jon Stewart and his gang.

Throwing the hockey mom down our throats may not have been Karl Rove's idea, but the GOP has been paying attention during the last two elections. They know what it takes to win. Employing Rovian tactics--i.e. figure out what your competition will accuse you of and accuse them of it first--has worked before. Sure, it's not something to be proud of, but this is politics.

Which is why I'm so shocked when Republicans claim that McCain and Palin would bring about change or that they would clean up Washington. What? They're playing the exact same game as always. McCain's pick of Palin was political, it wasn't about choosing the best person to take over should something happen to him.

At the end of the day, any educated voter who chooses the Republicans does so either because they're rich and want to pay fewer taxes or because they think flexing your muscles shows your enemies that you are a force to be reckoned with. If it's because they're rich, I don't have an argument for them. They will probably pay fewer taxes with a GOP president. But if it's because they think the Republicans are the ones willing to do what it takes to keep America safe, they couldn't be more wrong.

I've heard the "the end justifies the means" argument regarding our occupation of Iraq and our use of torture. It's the equivalent of selling your soul to the devil and then being surprised when you find yourself in hell. You'd think that the 7th anniversary of 9/11 would have brought out the issue of how we deal with threats to our security. Instead, the talk was about whether Obama called Palin a pig and the nasty mudslinging that this election has brought about.

Guess we'll have to wait for Jon Stewart to steer us back towards the issues again by making a mockery of the talking points. If nothing more, the Daily Show will give us a good laugh, something I think most educated voters are in dire need of.
Posted by Inspirosity at 9:30 PM No comments:

A Glare, a Baggie, and a Showdown

The Argentina Post has a suggestion for Buenos Aires' dog poop problem: scoop dispensers located throughout the city. The post is really great, the suggestion is just ok. But somewhere along the way these rude dog-owners or overburdened dogwalkers need to be taught how to be more considerate. Let's face it, there are trashcans all over the city and I've seen plenty of mothers watch their kids drop candy wrappers on the street and not say a word. Being courteous is something we're taught, it doesn't come naturally.

I've been here for a year and a half now. My first date in BA was ruined by dog poop. I've learned since then. There will be no making eye contact with your date while walking. I can't walk around looking at the architecture or the trees or the shop windows. Oh no, my eyes are on the pavement lest I step in a pile of runny feces.

On one part of my block, a disgusting tower of a building is in the final stages of construction. For the past two weeks, they've redone the sidewalk in front. But since no one actually lives there yet, it's also the favorite spot for dog owners to chat on their cell phones while their pet defiles the pretty new sidewalk, the wall, the trees.

I happened to have a plastic bag in my purse, so I pulled it out and handed it to her. She didn't pick up the trail of turds, just called to her dog and walked away. If I had been more courageous I would have followed her and told her again to pick up her dog's mess. This woman probably threw paper on the sidewalk too and no one has ever told her that the trashcans are for trash. She hasn't been taught.

So this is a call to action. Keep a couple of plastic bags with you and hand them out to dog poop offenders. Glare at them, hand them the bag, and don't back down. If it calls for a showdown, stand your ground. Look, Paris had this problem and the French learned to walk around with baggies of poop. New Yorkers learned too. I'm not going to give up on porteños yet.
Posted by Inspirosity at 10:51 AM 13 comments: 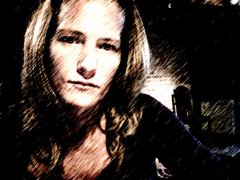 Inspirosity
Buenos Aires, Argentina
Born in Texas, raised in Louisiana, I studied history before leaving the States back in 1992. Since then I switch cities, countries, languages, and even continents about every two to three years.

This is a Flickr badge showing public photos from babalucci. Make your own badge here.